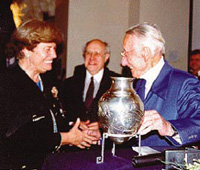 To actively promote incentives for environmental protection, the Biopolitics International Organisation (B.I.O.) has launched the Bios Prizes (video) to be awarded to those who have contributed to the re-evaluation of priorities in society and the development of new models and thinking for the future. The first Bios Prize recipient was Commander Jacques-Yves Cousteau, in recognition of his invaluable contribution to the increased understanding and appreciation of the bio-environment. BioNews N.8

The B.I.O. President, Prof. Agni Vlavianos Arvanitis awarding the first Bios Prize to Jacques Cousteau. The world-famous musician and humanitarian Mstislav Rostropovich delivered an opening address at the ceremony. Download the PDF for more information on the event

Mstislav Rostropovich and other leaders

A Bios Prize was awarded to The Kogi, an indigenous people of the mountains of the Sierra Nevada in Colombia, for safeguarding Mother Nature by preserving their native culture.

On March 13, 2000, at the CNN Centre in Atlanta, the Bios Prize for the New Millennium was conferred to Ted Turner, in recognition of his contribution to international co-operation, environmental awareness and action. More information 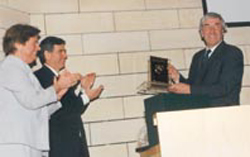 The Bios Prize for environmental stewardship and millennium vision. Ruud Lubbers, an enlightened statesman, has recognised the urgent need to turn despair into hope and to open new pathways for responsible leadership. His was honoured for his contribution to the environment, viewing it not just as an isolated topic, but as an issue of global concern, vital to the well-being of humanity. Photos, Programme