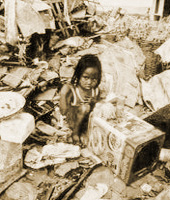 Global poverty is a multi-faceted issue, and unless all its dimensions are addressed in a comprehensive and coordinated way, the problem will never be solved. Poverty encompasses hunger, disease, lack of economic opportunity, inadequate education, inadequate health services, inadequate housing, water and sanitation. Often accompanying poverty are environmental degradation and natural resources limitations such as pollution, desertification, inadequate rainfall and loss of biological diversity. Together, these conditions contribute to a cycle from which people are hard-pressed to escape. Poverty in all its manifestations is self-perpetuating, and is passed on from generation to generation. It breeds despair, lack of hope for a better life in the future, and political unrest. The greatest tragedy concerning poverty, however, is that todays society has the ability and the means to eradicate it, yet it does not fully commit itself to this vital task. Rather, society are racing to gain economic wealth, political power and social advancement in a short-sighted manner that is often more harmful than beneficial.

According to recent estimates, world population will have exceeded 12 billion by the year 2080. This dramatic increase is contributing to the rapid depletion of natural resources, and is jeopardising the entire concept of world “food security.” Countries of the North should therefore adopt a new consumer-attitude so as to ensure a fair distribution of natural resources. Overpopulation in the South can only be controlled by a more balanced economic development, which will also contribute toward improving living conditions, and holding health and environmental hazards in check.

Since its inception, B.I.O. emphasises that the environment and poverty are closely inter-related. Problems of environmental degradation and large-scale poverty stem from humanitys failure to place respect for life on earth as a priority. To raise awareness of these issues, B.I.O. held a Hellenic-Indian Symposium, in Athens, in 1993, in cooperation with the Indian Embassy. The Symposium was themed Population growth, food security and equity, and Dr. Kamla Chowdry was the keynote speaker. Policy concerns for the eradication of poverty have also been discussed at B.I.O.s international conferences, and several articles on curbing poverty and hunger have been published in BioNews. An e-learning course on Food and Agriculture, where issues of world food production and hunger are extensively addressed, is available on the B.I.O. website. These issues are also addressed in educational modules prepared by B.I.O. within the framework of the European Unions Leonardo da Vinci vocational training programme.