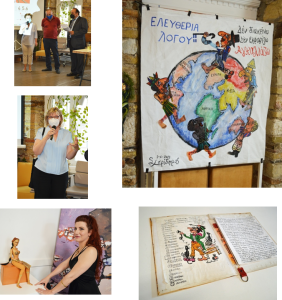 An intercultural event themed “Culture against hate speech and fake news” was organized with great success by the Biopolitics International Organisation (B.I.O.) (www.biopolitics.gr) in cooperation with the Avantgarde Culture and Development Center (www.avantgardecentre.gr). The event, held on 4-5 June 2021 at the Impact Hub of Athens, was part of the Pro Dialogue – Combating hate speech and fake news through the intercultural dialogue of citizens Erasmus+ project.

Doll artists and photographers from Greece and Russia exhibited their works together and used their art in an intercultural dialogue against hate speech. The event also promoted the global message of “bio-culture” (one of the most important B.I.O. initiatives since 1985), which supports multi-ethnic and multi-cultural societies and calls upon all actors to engage in a collective endeavor to uphold bios – life – as a vehicle for harmony and peace. By the same occasion, on June 5, B.I.O. celebrated World Environment Day with the BIO THINKTANK DIALOGUES convening distinguished participants from the fields of business and academia.

Works were exhibited by internationally renowned doll artists Konstantina Morou, Natalya Davidova, Alina Chirkova and Katerina Mitrakouand, as well as by the famous shadow theater player Sotiris Charitos (Charidimos). The photography exhibit featured works by Nicole Bartzoka, assisted by Dimitris Grammatikogiannis as Concept Editor. Benetton Greece was also among the featured participants. In appreciation of their support, B.I.O. awarded honorary distinctions to all participating artists, as well as to Elvina Tsantekidis for her warm embrace of the project.