2006 “New grounds for international political cooperation for Francophony in Europe” 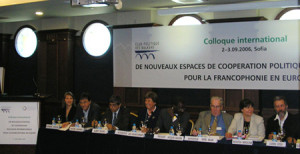 A meeting on “New grounds for international political cooperation for Francophony in Europe,” organised by the Balkan Political Club, in cooperation with the International Francophony Organisation and with the support of the Ministry of Foreign Affairs of the Bulgarian Republic, is held in Sofia, Bulgaria on 2-3 September 2006. The aim of the meeting is to culminate in a Final Act, containing concrete proposals, to be delivered as an address at the XIth Francophony Summit, which will convene in Bucharest, on September 28 and 29, 2006.

More than fifty political personalities and other leaders from countries in Central and Eastern Europe, Africa and other French speaking regions, have come together to discuss their experience and vision concerning the political role of francophony in an international and regional context. They are joined by scholars, researchers and members of civil society organisations in an attempt to better understand the specifics of francophony in international relations, the political aspects of francophony in Central and Eastern Europe, the inter- and intra-regional role of francophony, the institutional and democratisation developments seventeen years after the fall of the Berlin wall, and the contribution of civil society and education to the process of democratisation.

Distinguished speakers include, among others: