Bio-Environment: A New Renaissance in Business

in co-operation with the

Environmental concerns are defining the way businesses deliver value to their stakeholders and are shaping competition for the years to come. Profit is gradually becoming synonymous with environmental protection, and initiatives which acknowledge this interdependence will have a lead in the global market.

These were the main points stressed at the Biopolitics International business conference that convened on January 19, at the Holiday Inn Hotel in Athens, with the participation of experts in legislation, marine protection, clean energy sources, finance and management.

Professor Papadias stressed that the preservation of the environment is a responsibility we all share. For pollution to be reduced and for a better quality of life to emerge, we have to acknowledge this responsibility in our everyday lives, as well as in industrial development,. There is a need for a new philosophical perspective, and the B.I.O. provides the basis for this new perspective.

Professor Hatziargyriou mentioned the need for a far-reaching energy policy for the reduction of CO2 emissions. A policy which includes alternative energy sources, such as solar and wind energy. He also discussed the need to expand the use of current technology and improve the networks.

According to Professor Rigopoulos, Greece could become one of the leading countries in the production of wind energy, if there is an appropriate use of the windmill infrastructure already in existence.

Last but not least, Mr. Stambolis stressed that CO2 emissions could be reduced with the right energy saving policy, appropriate investment and, more importantly, tax incentives similar to those already effective in other European Union member-states.

Shipping and the Protection of the Seas

Marine pollution and the impact of the shipping sector were the issues discussed by HELMEPA Director, Dimitris Mitsatsos, and the Director of Spanos Maritime & Trading Ltd., George Spanos.

Mr. Spanos focused on the attitude of the shipowners’ world in relation to marine protection. He congratulated HELMEPA and the Biopolitics International Organisation for the promotion of incentives for marine protection and emphasised the dangers involved in the pollution of the Aegean and the Black Sea. 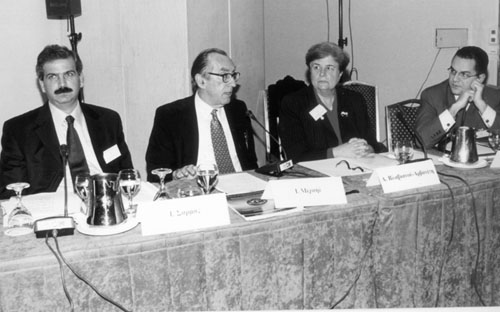 From left: Ioannis Sarmas, Member of the National Board of Audits; Ioannis Michail, Deputy Ombudsman for Greece; Dr. Agni Vlavianos-Arvanitis, B.I.O. President; Fotis Karayiannopoulos, Member of the Board of Appeals of the Community Plant Variety Office.

Finance, Development and the 2004 Olympics

Economic development which respects the environment was the subject of the next roundtable, featuring Constantine Ploumitsakos of Environmental Protection Engineering S.A., Constantine Kanonis, President of the Hellenic-Russian Chamber of Commerce, and Dr. Evangelos Tziavos, President of the Hellenic-Slovenian Chamber of Commerce.

Mr. Ploumitsakos noted that there is an urgent need for the sound implementation of a public policy relating to toxic waste management. The use of cleaner technology, the promotion of investments and the enforcement of European Union programmes will certainly bring a decrease in toxic waste production.

Dr. Tziavos proclaimed that any financial activity loses its meaning if it endangers the environment. He urged the Presidents of all the Chambers of Commerce to recognise the need for protecting the environment.

According to Mr. Kanonis, only projects which do not harm the environment will be financially viable in the future. From now on, investments on projects will be scheduled only if those projects fulfil certain environmental criteria. 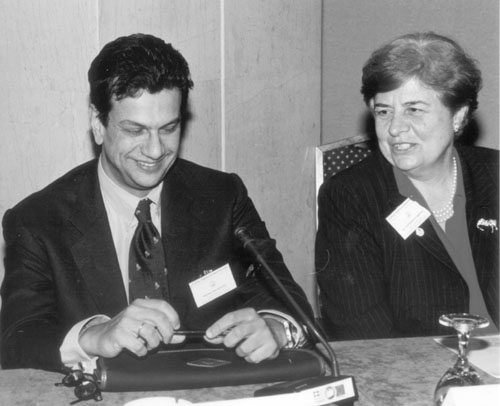 Telecommunications and the Media in the 21st Century

The role of telecommunications and the media in environmental protection was considered by ANT1 TV Satellite-Pacific Commentator, Nancy Biska, Dr. Dionysia Hatzilakou of “Georama” Magazine, and the International President of the Union of European Journalists, Athanasios Papandropoulos.

According to Dr. Hatzilakou, the point at issue is not the conservation of life, but the creation of what the ancient Greeks called “good-sensible” life. A magazine presenting the harmony of nature based on scientific research opens a window to the world. The experience of nature and the environment can lead to environmentally-responsible citizens.

The diachronic challenges of environmental protection were addressed by Dr. Stefanos Geroulanos, Professor of History of Medicine at the University of Ioannina. Professor Geroulanos discussed how Hippocrates was the first to write about the environment and to make succinct associations between disease and environmental parameters.

Mr. Angelopoulos discussed the rights of European citizens in general and in relation to the environment. Dr. Balaska showed how European Union programmes, such as Leonardo da Vinci, are associated with environmental concerns, while Mr. Diamantis analysed the ways in which the ISO 14001 standards can be implemented by enterprises.

Environmental Legislation and Quality of Life – Values for the Future

The conference concluded with a roundtable on environmental legislation and quality of life, with Michael Dekleris, hon. Vice-President of the Hellenic Council of State, Ioannis Sarmas, Member of the National Board of Audits, Ioannis Michail, Deputy Ombudsman for Greece, and Fotis Karayiannopoulos, Member of the Board of Appeals of the Community Plant Variety Office.

Mr. Dekleris gave an overview of the progress of environmental legislation and mentioned that the Maastricht and Amsterdam Treaties have created a strong legal basis for the protection of the environment. There is a co-evolution between economic development and the environment, however, globalisation which treats the market as an absolute sovereign is not compatible with sustainable development.

The closing remarks were delivered by B.I.O. President, Dr. Agni Vlavianos-Arvanitis. She referred to the need for new models and a new vision for society. Sustainable development, though operating as a first line of defence against environmental threats, has several constraints. Biopolitics seeks to overcome these constraints, by offering a “biocentric” framework for thinking and action in every human endeavour. She also referred to the recent establishment of the International Environmental Court as a mechanism for the resolution of global environmental disputes. Dr. Vlavianos-Arvanitis had actively participated in this initiative and had suggested that, rather than awarding penalties for environmental crimes, it should function as a court of arbitration.

The conference also included a film on “The Kogi of Colombia – A Tradition of Safeguarding the Environment,” and a musical programme for solo violin with Dr. Alexander Halapsis, Laureate of the International Music Competition and Director of the “Bios Camerata” chamber orchestra.