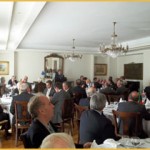 The escalating economic and environmental crisis experienced globally is obviating the urgent need for new paradigms and unprecedented levels of international cooperation and responsibility. The collective goal of the Biopolitics International Organisation – B.I.O. (www.biopolitics.gr) and of the Hellenic Chapter of the Club of Rome (www.clubofrome.gr) is to catalyze the reevaluation of societal values and build a society of hope based on the protection and appreciation of the environment. To promote this mission, a joint event was organized at the Athens Club on January 19, 2011, featuring Prof.Arthouros Zervos, President and CEO of the Public Power Corporation, as keynote speaker.

Prof. Agni Vlavianos Arvanitis welcomed all participants and stressed time as the most essential element in dealing with the global crisis. “Time is of the essence if we are to curb climate change and protect our dwindling natural resources. Twenty years from now everyone will understand the environmental threats. But for us the goal is to save time, and this is why we are here today with a very special purpose, a very special mission. I would like to welcome you all very warmly, and thank the friends who have been supporting B.I.O. for years. But, please allow me to extend a very special welcome to a distinguished B.I.O. Trustee and great friend, Professor Rusen Keles. We have been building together for over twenty years despite everybody saying that cooperation between Greece and Turkey is impossible! We have organized more than 40 conferences, published books with the contribution of many friends, and we have worked on numerous educational projects. Clearly, when people understand that differences are our richness when building a common goal, a common future, life is easier. Instead of ‘divide and rule’ practices, we should focus on ‘unite and progress.’ The more diversity we have in color, religion, language and tradition, the richer we are. This is exactly what we have to preserve; the diversity in culture, the diversity in biological species, in plants and animals. No one wants to have just one type of plant. The diversity of life is our wealth and it should infuse us with joy. Speaking of wealth, there is something that is causing problems; it is the insatiable desire for over-consumerism, practiced by more and more countries. Over-consumerism has led to a crisis in values and to the financial instability and climate change threatening our future, and so we have to rebuild our value system by placing as a priority the preservation of life, the beauty of our world. Peace, health, education, job security, culture, safe natural resources, biodiversity, clean air, are a genuine profit for humanity. We have to change how progress is measured. I was in Uzbekistan recently, thanks to the Consul General who arranged this most insightful trip. I feel deeply grateful for going, because I witnessed a very serious problem that recapitulates what we will be discussing here today: the tragic situation of the Aral Sea. Once the fourth largest lake in the world, the Aral Sea is now devastated and with it the lives and livelihoods of hundreds of villages. Polluted dust clouds threaten the health of the population and 80% percent suffer from asthma. Children are born with genetic deformities. Precious time is lost and I feel guilty. As human beings, we should all feel guilty. Let us convey to our leaders that they have to act quickly and wisely to protect the environment and life before it is too late.”

Prof. Arthouros Zervos described the current situation in the energy sector globally and explained that the extended use of fossil fuels has serious impacts on the environment. “Environmental and economic challenges are getting more and more complex globally while at the same time, at the national level, the urgent need for radical reforms and initiatives to get Greece out of the current crisis is directly related to the new energy scene and the investment that will be made in the country in the next few years. In this new energy scene, the Public Power Corporation will hold a strategic role and become a means to development of sustainable societies and of fighting against Greece’s current economic crisis. PPC has a vital role to play in tackling the biggest environmental and social challenges facing the world today and we are proud to be leading the way through investments directed to a future characterized by energy sustainability.” Prof. Zervos proceeded to highlight the urgency for a smooth transition to inexhaustible and stable cost renewable energy and for the development of a genuine low carbon economy for Greece, and pointed out a number of significant projects to that effect, such as the PPC’s current investment in power production. He referred to the installation of one of the largest wind parks in Greece, in the region of Viotia, as well as to a current project concerning the largest photovoltaics park in the world in the region of Megalopoli. He pointed out the PPC Renewables key role in one of the most pioneering hybrid projects in Europe, involving the islands of Ikaria and Gavdos, and emphasized the interest of the PPC in the development of geothermal and biomass technology. Finally, he concluded that a new “green” culture should emerge and that the present goal of the PPC is to place effective environmental policies on a new basis, to strengthen its social role, and to become one of the most socially and environmentally responsible companies worldwide. Click here for full text of speech

A fruitful discussion and exchange of views followed, highlighting the types of decisions that governments need to make for the mitigation of climate change and for the promotion of sound economic and energy policies to ensure that we move forward in a prudent way that maximizes societal benefits. In her concluding remarks, Prof. Agni Vlavianos Arvanitis thanked the keynote speaker and all the participants for their insightful comments and noted that: “The global economic crisis that we all have encountered has clearly shown how dependent we are on each other. It has also shown that irresponsible or selfish actions cause problems for the entire world. Therefore, it is especially important that governments, financial authorities, and world decision-makers synchronize their policies and engage in collective and thoughtful action for the benefit of the planet and future generations.”